Happy Holidays from our Family to Yours

Peptalks proudly supports the Waterbury Fire Department in their annual fundraising efforts for the Connecticut Children's Burn Camp
Help us improve the lives of children from Connecticut and around the world who have survived life-altering burn injuries by purchasing the 18th annual WFD Christmas Ornament.  These Handcrafted Solid Pewter Ornaments will provide holiday enjoyment to your family for generations to come. 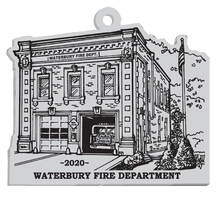 Construction on Station 8 began in 1919 and was completed Sept 2, 1920 at a total cost of 38,037.  The project was commissioned by Mayor H. Sandland, a former volunteer with Citizens Engine No. 2.  It was designed by architect Joseph T. Smith who also designed Station 3.  ​It originally housed an American LaFrance triple combination motorized pumper purchased in 1919 for $11,850.  The original officers were Captain Joseph H. Bagley and Lt. Frank J. Finn as there were only two shifts at the time. 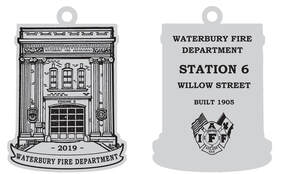 Located at 471 Willow Street, construction began in 1905 and was completed in 1907 at a total cost of $7,800.  Originally called the upper North Willow Street Firehouse, it housed the Volunteer Brass City Hose Company #6, which had been formed in February 1887.  It was the first volunteer house built under Chief Snagg.  Station #6 received its first motorized apparatus, an American LaFrance, in 1918.  Today Station 6 continues to serve the Willow Street, Overlook and Waterville neighborhoods.