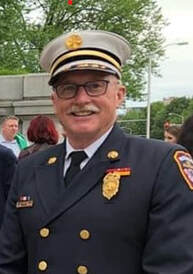 Deputy Chief Rick Hart
A 40-year veteran of the fire service, Deputy Chief Richard Hart began his career with the Waterbury Fire Department in 1989.  Prior to that, he volunteered as a firefighter and EMT in Litchfield, CT and worked as a paramedic for Campion Ambulance.  In Waterbury, Rick saw duty on several of the city’s hardest working and busiest companies including Engines 10 and 7 as well as Truck 3.  He is a graduate of the Executive Fire Officer Program at the National Fire Academy, holds a Bachelor of Science in Political Science and a Masters in Executive Fire Leadership.  DC Hart has been involved on the CT Incident Management team, the development of the Waterbury FD First Responder program and Cancer Awareness program.  Additionally, through his current position as Director of Legislative and Political Affairs with the UPFFA, DC Hart has taken an active role in the development of Connecticut’s firefighter cancer presumption legislation and most recently the PTSD coverage for first responders.